This harvest we are fresh hop brewing (virtually) with friends.

The story of this year’s Chasin’ Freshies collaboration with Bitburger began in 2019. It was a little baby idea that rose up towards the sun like the hop bines do each year. We met the wonderful folks from Bitburger at an event called the Bitburger Challenge at the beloved German bar Prost! in Portland Oregon. In an exciting win for our Portland brewers Jake Harper and Jim Lazenby, they accepted the trophy from Jan & Stefan from Bitburger when they won the judge’s panel as well as the people’s choice award . While this story is ultimately not about a Pilsner- what would become the widely adored King Crispy- it is hard to talk about Chasin’ Freshies without starting here. As part of the win, Jake and Jim jet set out to Germany where they toured the Bitburger hop farm, explored the oldest town in Germany- Trier, and tasted some of their experimental brews coming from their pilot. As if that wasn’t enough the trip was perfectly timed to hit a small craft beer festival in Trier and included an epic pub crawl after building up a fine thirst by bicycling around the area. 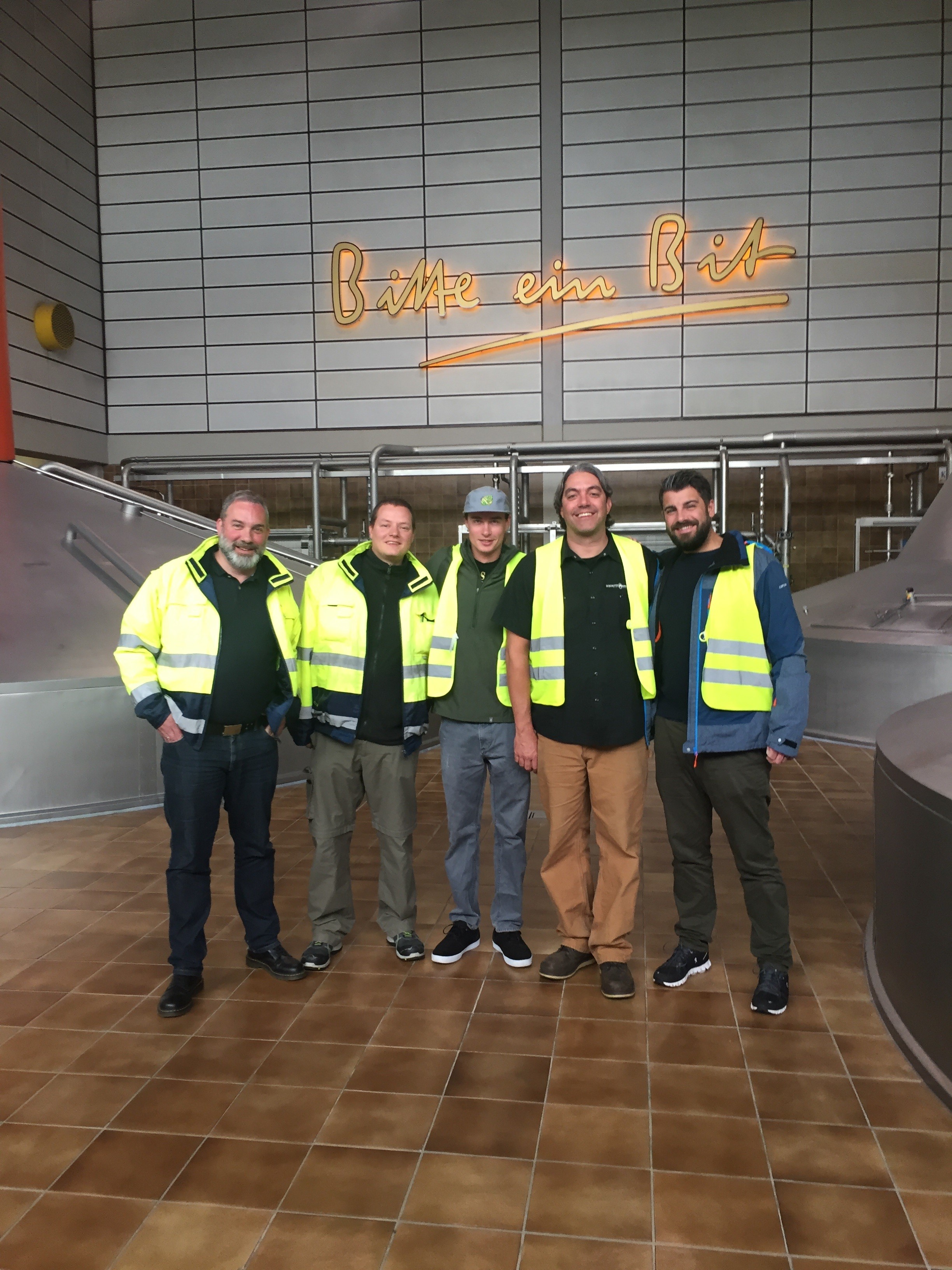 A rally of projects began hitting back & forth between both continents.  Jake & Jim worked with the Bitburger team on a Dortmunder beer that sadly never saw a release cause: COVID, and the Deschutes pilot brewery in Bend began preparing for what would big our large package release in the U.S. Our brainstorms began in somewhat obvious places. We lingered on the idea of an India Pale Lager for a bit since Bitburger brews ups incredible lager beers, but  took a big pivot towards a fresh hop beer after having learned more about Bitburger’s role in the development of fruit forward hop Callista. While on the outside Deschutes & Bitburger may seem like very different breweries -our portfolios certainly are-we are more alike than it would seem. We are both family-owned breweries, both regionally foundational in the craft beer communities that now surround us, both enamored by humulous lupulus, both breweries invested in hops breeding programs that produce new varieties. Bitburger even has their own proprietary variety- Siegelhopfen, which they were generous enough to share with us for the project.

Recipe-wise we built a hoppy beer with Siegelhopfen & German Callista in the kettle and two American varieties Triumph and Cashmere to be brought into the brew fresh from harvest. Both varieties were developed through public breeding programs which allows these varieties to be grown anywhere. We arrived at this selection of hops through a series of single hop brews during the harvest season of 2019, tasting and discussing the project over Zoom calls.

As the Oregon hop harvest kicks off, we are faced again with some more challenges in getting together to brew the beer. The Bitburger team continues to be awesome as we all travel through the pandemic. The brew schedule is also at the whim of the harvest timing of these two varieties, a complication we are familiar with as the fresh hop brewing season brings excitement on many levels annually.

To our friends at Bitburger- we have been so honored to work with you on this incredible project, and can’t wait to get together, share a beer (or two) and say- Prost!! 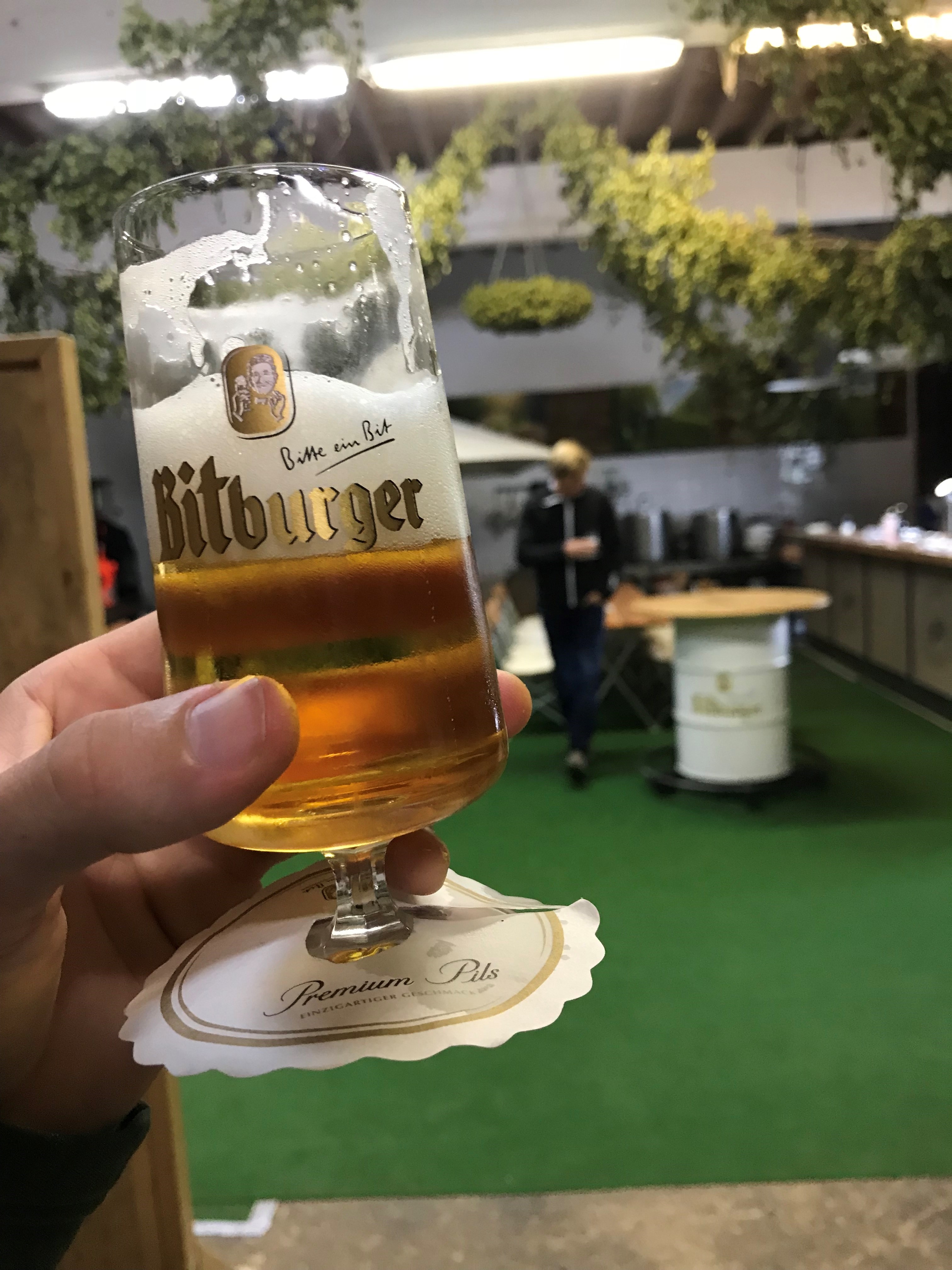